How to Create an Action in SAP

Configuration of Personnel Actions and events

In part one of this blog, I discussed personnel actions in SAP HCM and talked about their purpose and how to maximize their impact on your data and reporting. In this second part of the series, I share some step-by-step tips for configuring actions and reasons in your system.

Routine personnel procedures within master data administration, including hiring, terminations, and reassignments, are referred to as personnel actions. Each one contains a sequential set of infotypes related to the action, which is referred to as an info group. As you probably already know, the SAP HCM and Payroll-related data for your employees is stored in infotypes, see sample below.

Step 1 – Create a User Group Dependency for the Info Group

To create an action, navigate to the IMG (the menu path Implementation Guide for R/3 Customizing>Personnel management>Personnel administration>Customizing procedures>Actions.) You are prompted with a dialog box with three items, the first of which is User group dependency on menus and info groups. Double-click this option. There are five columns for each line in the table described in the table below.

Next you need to create a group of infotypes that you would like bundled together for your action. This bundle is called an info group. Define info groups is the third action item in the list in the Action section of the IMG.

On this screen, enter the list of infotypes in the order you wish them to appear during the action. There are eight columns for each line in the table described in the table below.

Step 3 – Create a User Group Dependency for the Info Group

Creating an info group is relatively simple. Having an understanding of which operation is best for each action takes a little thought. The options include:

Termination actions are different. You do not use the INS operator because you do not want to insert blank records. Rather, you use the LIS9 for many of the infotypes, because you want to delimit them as part of the termination. The delimit operator ensures, for example, that their benefit plans are terminated.

You will want to use the COP operator for some infotypes in the termination action. In those cases you may want to preserve the employee data as it was, but keep it updated to the new event. You never want to delimit infotype 0 or 1, as these should always exist until 12/31/9999. For organizational changes or personnel status change actions, use the COP operator as you want to make a copy of their previous infotype in order to ensure that history is maintained appropriately.

Now that you have created the infotype menu (step 1) and the info group (step 2), all you need to do is to tie them together with the action. Go to the IMG (menu path Implementation Guide for R/3 Customizing>Personnel management>Personnel administration>Customizing procedures>Actions>Setup personnel actions). Upon execution, you are prompted with a dialog box with three items. Double-click on the second, Personnel action types. Each line in the table has 16 columns described in the table below.

Step 5 – Create Reasons for Your Action

Now that an action has been created, you need to create reasons associated with the event. Go to IMG menu path Implementation Guide for R/3 Customizing>Personnel management>Personnel administration>Customizing procedures>Actions>Create reasons for personnel actions. Each line in the table has 4 columns described in the table below.

Step 6 – Add Your New Action to the Action Menu

Now that you have created an action and its associated reason codes, you add that action to the action menu (transaction PA40) via IMG menu path Implementation Guide for R/3 Customizing>Personnel management>Personnel administration>Customizing procedures>Actions>Create action menu. Upon execution, you will see a dialog box with two options, the first of which you saw in Step 1. Double-click the second option, Action menu. You are prompted to enter the action menu number 01. You'll see the screen that contains four columns as described in the table below.

When you are creating your action menu, use two-digit numbers with intervals of 10 between them for the sequential numbers in column 2. These numbers determine the order in which actions are presented on the screen. If on your initial configuration you number them 10, 20, 30, 40, you can always return and insert new actions in the middle of the existing sequence – i.e., 15, 25, 35, 36, 37.

Changes made to an infotype or infotype fields often affect field entries in other infotypes. For example, if you change an employee's work schedule on infotype 0007 - Planned Working Time, it may impact some fields on infotype 0008 - Basic Pay. You can set up dynamic personnel actions in the system settings to handle these. For more information on dynamic actions see the article, "Unleash the Power of Dynamic Actions: Tips and Tricks to Get the Best Results," by Rehan Zaidi, in the July 2003 issue of HR Expert. 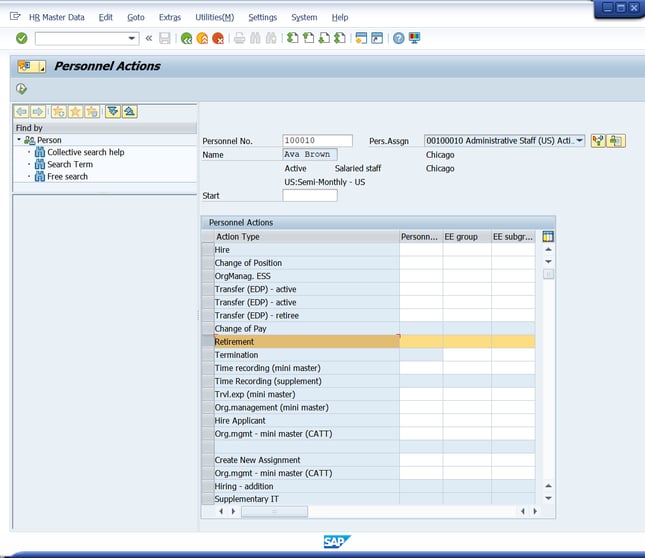 Visit my other blogs "A Quick Fix to Employee Status that can improve Your HCM Reporting" and "How to design your HR Actions better to improve HCM Reporting".

Our primary featured author is Danielle Larocca, an SAP Mentor and published author who offers insights into how companies can get the most value from their Human Resources (including SAP HCM and SuccessFactors) investments. We also invite other specialists in this field to contribute their expertise.