What is Report Stories in People Analytics?

What does RPA have to do with HCM and Payroll?

Understanding how Robotic Process Automation (RPA) is a game-changer for Human Capital Management.

I remember the first time I saw a Microsoft Excel macro in action. I was thrilled that it automated some routine Microsoft Excel formatting and calculations so efficiently for me, all after I recorded a simple repetitive process. I often use the macro example when explaining Robotic Process Automation or RPA.

What is Robotic Process Automation?

Today’s office workers spend a lot of time moving between different applications. To complete a specific task, they often have to re-enter or copy and paste the same data – such as a customer’s name and address details – from one application to another. Such manual work is laborious, time-consuming, and prone to error. RPA uses software robots to emulate human users and automate – as far as possible – these tedious, mundane tasks. (SAP’s definition from SAP Intelligent Robotic Process Automation Whitepaper: Launch Business Productivity into 2020)

In the old days, I recall the hard copy printing of reports that were distributed manually (via a mailroom clerk who walked around with a cart!) to several different department heads, who then had the responsibility to take subsequent actions on the data in the reports. An easy example is a list of new hires that would be starting in the coming week that the manager would need to get set up as new employees: getting them a security ID, computer equipment, a workspace in the building, access to the network, a uniform, new hire paperwork and so on. In this example, for each new hire there were approximately a dozen different subsequent actions the hiring manager would need to take. See the sample below: 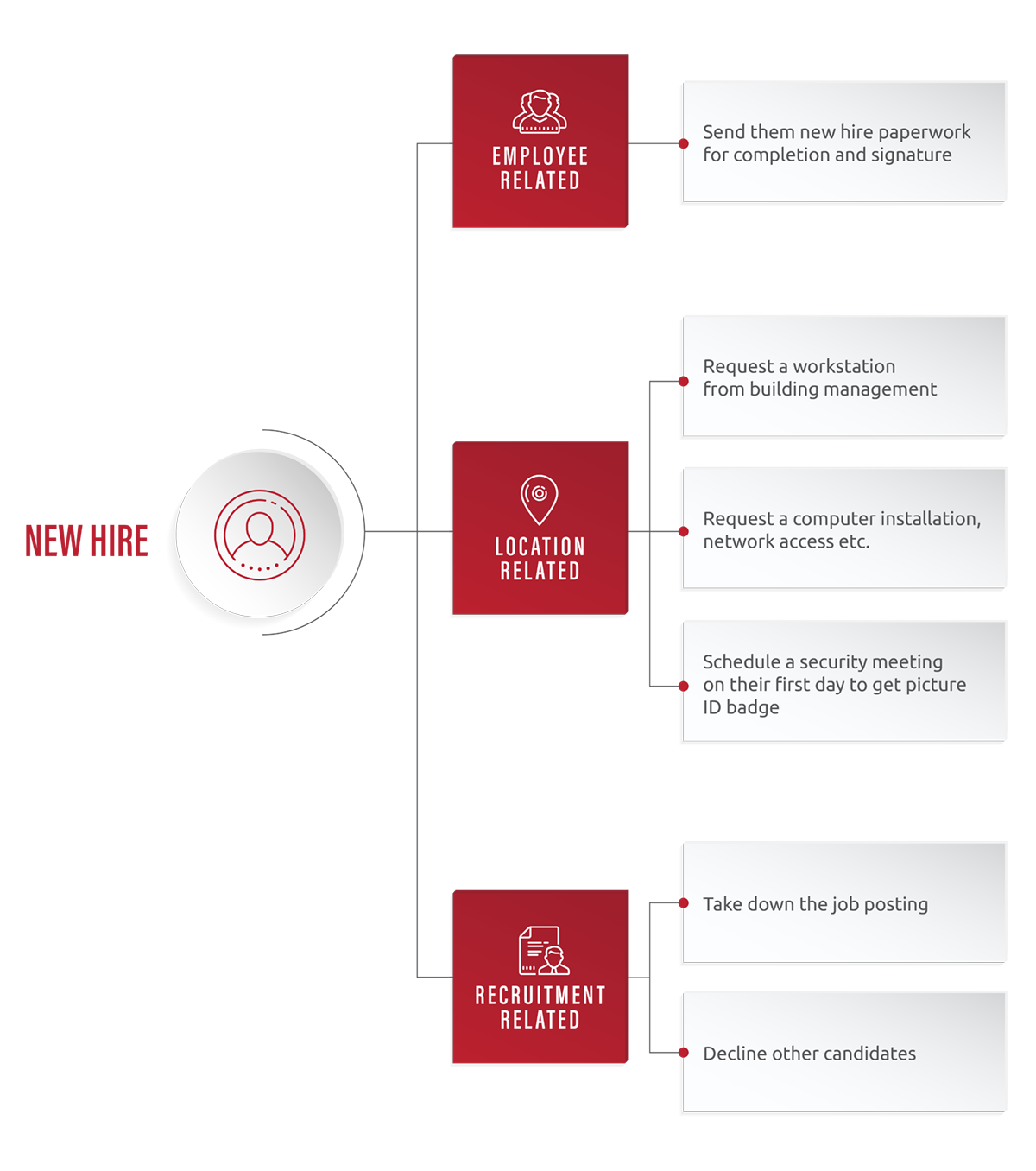 With RPA, virtually all of the steps in this process could be automated – from the backend execution of the original report that identified all of the new hires, to a bot (or bots) that could take forward each of the subsequent actions with the appropriate departments. This automation could eliminate the manual tasks, efforts, and resources that were previously tasked with doing this.

In the above example, I included a single-step process for each but, as you can imagine, a multi-step workflow is a more likely and a more beneficial scenario. See sample below:

How can RPA be used in HCM and Payroll?

The items that can be automated by leveraging RPA in the HCM and Payroll space is unlimited. An easy way to approach this is to think of any activity performed manually which could include the items listed below:

Here is an interesting quote from SAP’s Product Manager for SAP Intelligent Robotic Process Automation, Praveenkumar A K: “With 77% of all worldwide business transactions touching an SAP system, SAP is known to be the process backbone of the world. So, during these days of unprecedented change, where the enterprises around the globe strive for higher efficiencies via automation, it is our endeavor to put business users in front and center to lead this change by embracing technologies like the intelligent RPA.”

To see how you can get started with RPA in your HCM system, check out how we leveraged an executed report in tandem with a fully-connected RPA framework that performed the subsequent activities required for a termination using the SAP-certified Query Manager solution.

The SAP SuccessFactors HCM Journey: Ensuring data quality before, during and after your SAP HCM implementation